July Client of the Month – Roseline 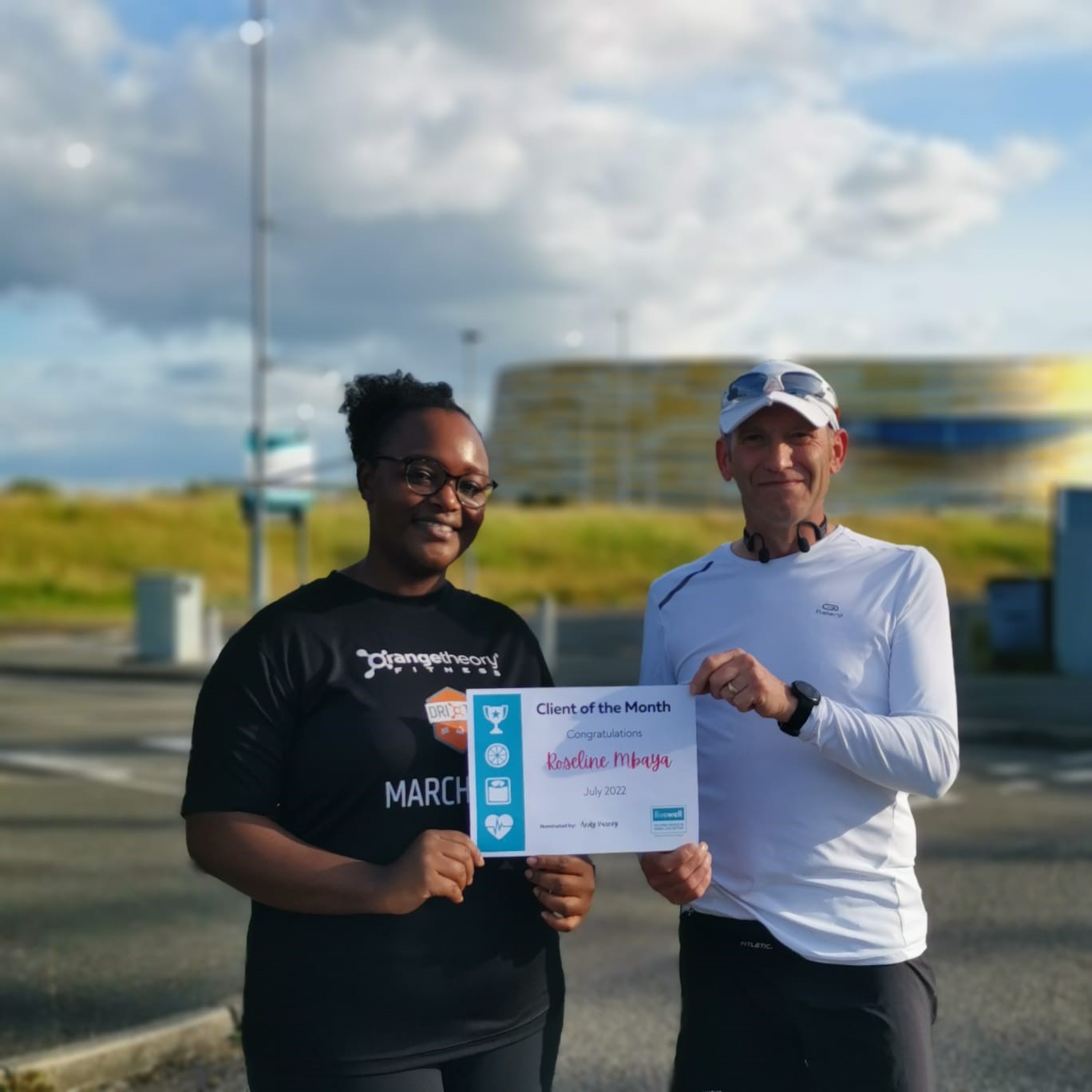 Roseline’s ‘get up and go’ mindset was the reason advisor Andy nominated the 36-year-old mum of two for this month’s award.

Since joining in November, Roseline has lost 10 kilos, dropped two dress sizes, lowered her blood pressure and regularly ties up her laces to jog – phew!  She also takes part in regular gym challenges and has improved her healthy eating knowledge through Livewell’s Lose Weight Feel Great course, using the practical tools and resources to plan and portion her meals.

At the time of writing, Roseline is set to complete the Alvaston Park Run on Saturday 16 July for her 5k graduation after completing the Couch to 5k course with Derby Joggers

“I considered myself a ‘big girl’ growing up and have always struggled with my weight.  I actually love exercise and led an active life at University and during my twenties but over eating has always been my downfall.  I’d tuck into big portions of fatty foods which far exceeded the calories I burned.

My weight piled on during and after my pregnancies.  It’s hard to get to the gym or out running with two toddlers to look after and it’s so tempting to snack and finish off their leftovers. I often felt too exhausted to cook something nutritious.

Feeling low and unhappy with my size, it all came to a head in winter last year, so I contacted my doctor for advice and they told me about Livewell.

I joined an activation group in November, where I met my advisor, Andy Varney.  He encouraged me from the start and had a straight-forward way of explaining things in a way that made a lot of sense.  Through regular calls, texts and emails, he motivated me to keep track of my eating and guided me through some low moments, reminding me that losing weight is a journey – small gains and plateaus are to be expected.

In February I started the Lose Weight Feel Great course with Cathy which taught me so much about the quality and quantities of foods.  Having tried lots of different diets, it was a revelation to find an approach to eating that’s all about balance.  I learned about portion control, food labelling, mindful eating and the importance of meal planning.

Batch cooking has changed the way we eat as a family.  Sunday is meal prep day and taking requests from the kids, I cook up nutritious casseroles and other veg-packed dinners and freeze in portions to defrost for speedy midweek meals.  As a result, we’ve cut down on food waste and we’re eating sensible, healthy-sized dishes.

From Couch to 5k

Learning that I once enjoyed running, Andy suggested I join Derby Joggers Couch to 5k course in April.  Arriving at the first session I was wracked with nerves, thinking everyone would be super fit and would leave me behind.  I couldn’t have been more wrong.  The volunteers and leaders are so supportive and the people in my group were all beginners with similar goals.  No-one runs alone and it feels so good to be doing an exercise I enjoy as part of a friendly group.  I’ve built up from running one minute at a time to covering 30 minutes without stopping in 9 weeks.  I can’t wait to run the 5k graduation run later this month.

In combination with running two to three times a week, I also do two weekly gym sessions, taking part in challenges to vary things up and keep me focussed.

When I think back nine months ago, I can’t believe the difference.  Where I’d avoid the stairs for fear of getting breathless, I now gallop up and don’t even think about it.  My blood pressure has reduced to a healthy range, which puts me at a lower risk of developing heart problems and other conditions. I feel happier and more energetic than I have in years.

My daughter turns four in August and when she told me she wants to try running, martial arts and swimming, I couldn’t have been prouder.  Seeing her mummy enjoying being active is obviously rubbing off on her and being a positive role model to my kids is so important to me.

My husband and mum also tell me how proud they are and I’m always trying to rope them and my friends into running with me.

My long-term goals are to reach a healthy body mass index and run the Derby 10k next April and I’m feeling positive about ticking them both off!

If it wasn’t for Livewell I wouldn’t have been able to pick myself up, I really appreciate what Andy, and the team have done for me.”

“I nominated Roseline because of her positive go-getting attitude. From the start of her Livewell journey she had clear goals of what she wanted to achieve and she set about achieving them. If things didn’t go to plan, Roseline didn’t give in. She took steps to change things and move forward. Roseline has completed the C25K course and I have no doubt she will complete the Derby 10k next year.”

Roseline’s diet and exercise before and after:

Derby Joggers offers FREE Couch to 5k courses for beginners starting in September 2022.  Find out more about this friendly group on the Derby Joggers web page.

Date
Back to news